That's exactly what we're asking you to do with the 2018 WFP Innovation Challenge.

I had a chat about all of this recently with Chris Hjorth at WFP's Innovation Accelerator in Munich. But Chris is by no means rooted to his desk. His work with SCOPE CODA has led him to Tajikistan just last month, and he's also been to South Sudan, Uganda and Madagascar before that. A group post by our Accelerator Head Bernhard Kowatsch, referencing an article entitled, "We Need to Change the Way We Think About Failure in Europe" first sparked our conversation, about how this idea can apply to WFP and the world at large.

Chris's journey in the private sector, in addition to his experience thus far with WFP, has led him to be convinced that failure actually equals learning, and eventually leads to success. Independently echoing Will Smith's sentiment, however: the later you fail, the higher you fall. You may have seen last week's post about DESIGN principles.

Naturally, during that process, many ideas are going to get thrown out of the proverbial window. But it's important to remember that even some of those that you do "try and test" will fail. It's natural. As Chris puts it, when you come up with a big idea (no matter what it is) and finally muster the courage to share it with someone, most people fall into two camps: they are either curious and want to see what happens, or they say that could be interesting, but it's really not going to work. While a dose of healthy skepticism is practical, for the purposes of this Innovation Challenge, we encourage all of you to be a part of the first group. 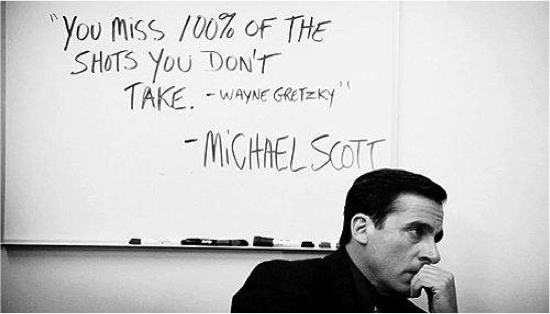 Think about learning to play a sport, such as basketball. You're not going to be very good when you start, Chris points out. You are going to fail more times than you succeed. But all that work and practice (like "testing" an idea) gets you closer and closer to the goal. To continue with a sports analogy, Wayne Gretzky, widely considered to be the greatest hockey player of all time, is famously attributed as having said, "You miss 100% of the shots you don't take". But the same mantra could be applied to learning to play an instrument, succeeding in the private sector, or making the newest humanitarian innovation come to life.

In Chris's case, one of his earliest journeys (and "failures") as an innovator came working on an online platform for the renting and sharing of music equipment - kind of like an "Airbnb" for music. The idea was that kids who wanted to learn to play the violin (or whose parents wanted them to), for example, could rent this instrument for a short period to test it out, before investing the time and resources to commit fully to it.

Sounds like a pretty good design, right? Well, as Chris puts it, his team's downfall came in skipping ahead and wanting to "scale", or bring the idea fully to life, much too fast. They took a shortcut, and went straight to an "expert", who happened to be a touring musician.

While the idea could have also worked for professional musicians or bands, who may be traveling from place to place and may not want to lug around heavy equipment such as amplifiers, the expert emphasized that they should focus more on this type of equipment, and de-emphasize the instruments, stating most musicians really like to use their own guitar, for example, and wouldn't want to loan it out to others. The app lost its original "peer to peer" sharing ethos, and eventually failed. Had they "failed" earlier, however, by testing the application with kids and families (in addition to smaller local bands), for example, they may have actually learned more, and ultimately had more success.

After working on various other ventures, including building an engine for an influencer marketing analytics platform to analyze how "micro-influencers" could affect social media spaces of businesses, Chris eventually decided to join the humanitarian sector, following a conversation with a colleague in the innovation sphere at an external start-up bootcamp accelerator (namely, SCOPE CODA Project Manager Federico Naccarato,⁠ which emphasized focusing on hard problems with solutions that have a positive impact on the world. They both had the idea that Chris could use his programming, user-centred design and product development and data analytics skills and apply them to the work of WFP.

This manifested itself into his joining the team at the WFP Innovation Accelerator in Munich, focusing on SCOPE CODA, which was previously called "Nutrimiles", and then "MAPS" (and still is, in El Salvador). Looking to scale the idea to South Sudan, the team was looking for more expertise, and Chris was happy to fill the role. CODA (Conditional OnDemand Assistance) builds upon WFP’s existing beneficiary management system, SCOPE, to meet the technical needs of nutrition treatment programmes, in providing a unified platform for registering individuals and monitoring performance.

For those of you who don't already know, SCOPE CODA enables information sharing across multiple social protection initiatives. It replaces paper-based registries, ration cards, and reports with a smartcard for each person receiving support and an electronic database. Although initially developed for community-based management of acute malnutrition, SCOPE CODA can be used by any programme requiring on-demand distribution and decentralized conditionality monitoring.

With SCOPE CODA, Chris has adopted the "fail early" approach (combined with human-centred design, which we highlighted in the recent DESIGN blog post), to avoid more growing pains and ensuring faster success. This was done by participating in on-site field scoping missions and performing remote testing before implementing in participating countries.

As Chris points out, there is no real "hero story" about failing. Yes, the hero in a movie (such as one in which Will Smith might appear), may make mistakes along the way, but those mistakes are not necessarily celebrated. While those failings helped the hero on his/her path to success, without the learnings they led to there would be no success.

That also holds true for humanitarianism and the work of WFP specifically, where we, of course, want our ideas and initiatives to succeed as soon as possible. Still, what the Innovation Accelerator and this year's Challenge is offering you is a chance to design what you think is a great innovation, share it with us, and have a chance to develop it with our team of experts.

Best of luck on the road to submitting your project. And don't be afraid to fail along the way!