Lather, rinse, repeat. Some of you may recognize these standard instructions, which appear on the backs of many shampoo bottles. Sounds straightforward, right? Wash your hair, rinse it out, and do it again. Yet such simple directions have been criticized over the years as seemingly having no end. Should one continue to blindly repeat the process until the shampoo bottle is empty?

In humanitarian innovation terms, how can look at the word "repeat" differently? What if we consider "repeating" not as a mindless set of tasks one must follow in an endless loop, but rather as a means towards learning and adaptation?

This is exactly the definition we seek to promote here at the Innovation Accelerator in Munich, and one that we hope you keep in mind when you consider submitting an application for this year's Innovation Challenge!

Innovation Accelerator Project Lead Nina Schroeder has a lot of experience repeating and adapting on the fly, both in her career before WFP and currently. Nina is the Project Manager for H2Grow, an amazing hydroponic solution to address the problem of global hunger in places as diverse as the slums of Peru and the deserts of Algeria and Chad.

Before WFP, Nina founded Tea Tales, a company which set out to disrupt the existing market by making tea as convenient, hip, and “on-the-go” friendly as coffee. The process took lots of small-scale testing, failing and “repeating” to get it right. But this was not the mindless repetition advocated on the back of a shampoo bottle. Instead, Nina and her team user-tested at every stage, combining classic market research and human-centred design methodologies, adapting along the way. 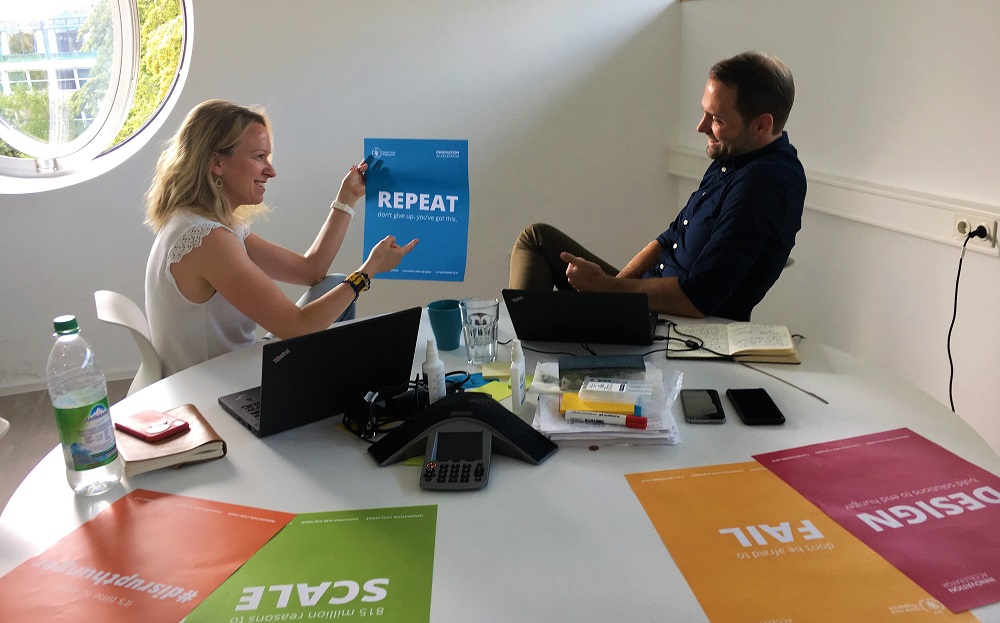 While they originally intended to open a host of tea bars, showing the full new tea experience in dedicated locations, that model changed, and the team soon realized that they would do better by selling the model to existing cafes, training their staff, and promoting the Tea Tales lifestyle within those business (more of a “B2B” approach). The idea took off, and now their products can be found throughout Germany, including the innovative “Magic Tea Maker”.

Nina was invited to several food and innovation conferences and trade shows, including Berlin’s Food Week. Throughout this process, she learned more and more about the global food system in general, and became further connected to nutrition and healthy living circles as a result.

One of Nina’s main motivations in founding Tea Tales was to create a business with a positive social impact. They decided to only source their teas from plantations which provided fair working conditions, but also held workshops for people with disabilities, ensuring that social impact was at the core of their core values. In addition, food waste, disparities between rich and poor and the way in which global “food trends” negatively affected the supply chain and micro-economic systems began to bother her. She decided that she would love to see if she could have further influence and increased impact in this sphere, bringing her knowledge and passion of the humanitarian food sector “out into the world”.

Luck would have it that the WFP Innovation Accelerator in Munich was looking for a project manager for its first H2Grow pilot in Peru. The Peru Country Office themselves made the proposal to introduce hydroponic growing (a soilless, minimal water-usage technique) in the slums of Lima, and even went through an Innovation bootcamp in Munich with the idea. Upon accepting signing her contract, Nina essentially went straight from Berlin to Lima to kickstart the project there, when it was still in its nascent stages.

Nina and her team set out to understand the “users”, in this case female beneficiaries and families in the slums of Lima, and considered what knowledge already existed in this area before setting up their first hydroponic growing classes. Together with the Country Office and intern Lucrecia (now the Project Manager for H2Grow in Chad), they started working with women on how to grow hydroponically, and Nina and the Accelerator got a startup from San Francisco on board to help create simplified, adapted and digitized training materials.

H2Grow represents the first time the Accelerator has supported a hydroponics project, and to really get it off the ground the team needed to tweak the process throughout, repeating and adapting on the fly. Nina got connected to the food scene in Lima, and presented the project together with Merly, a mother from the slums at the largest food fair in Latin America Mistura, invited by Chef Palmiro Ocampo. He continued the collaboration with WFP Peru, starring reality show on national television, where he presented healthy nutritious recipes with specific local ingredients under certain price points that was invented by the Country Director Carmen Burbano. The Country Office, national government, universities, and implementing partners were all on board with the project, and thus it really took off.

The next step for H2Grow was to “repeat” the process in Algeria, in the dry, arid, Sahara where Sahrawian people living in refugee camps could greatly benefit from the ability to grow healthy vegetables without soil. It seemed like a perfect match. But in fully embracing the concept of repetition and adaption, the team came to realize that the model from Peru would not exactly match what they were attempting to do in Algeria. It was not only a completely different setup, in an isolated refugee camp, different climate (which hydroponics could overcome), but also a very different culture.

The Sahrawi people are traditionally semi-nomadic herders, who place a high value on their livestock (which in turn produce nutritious milk and meat). Rethinking the process with Taleb, a Sahrawi engineer who also attended an Innovation bootcamp, they realized together that providing their livestock with better quality barley fodder would, in turn, lead to a better quality and higher yield of milk (and all its by-products), ultimately resulting in better nutrition for the community. In addition, any extra animal products that were produced could be sold at market, ensuring that livestock-owning families who utilized hydroponic growing techniques would have more money to feed themselves and their families more sustainably.

Nina emphasizes that yes, it’s important to repeat an idea that has proven it can work (a “proof of concept”), yet it’s equally (if not more) important to learn to adapt and localize to ensure the success and sustainability of a project, or it will ultimately fail, and at that point it could be too late (see our previous “FAIL” post).

At the WFP Innovation Accelerator here in Munich, that’s a true point of emphasis – our team would not continue to promote the implementation of a solution unless it’s sustainable, and sustainability often most clearly reveals itself in the form of community buy-in. In Algeria, the idea of using hydroponic growing techniques and H2Grow’s unique solution for animal fodder came from the refugees themselves. They emphasized that local diets revolve around the by-products of their livestock, and so making them healthier and more valuable would, in turn, improve the health of their community.

H2Grow has continued this repeat and adapt model since then, testing a higher-tech “food computer”/controlled-environment solution to support Syrian refugee camps in Jordan (where climate change and lower water reserves have necessitated some “out of the box” thinking), and a replica of the lower-tech version of Algeria's hydroponic growing fodder kits to Sudanese refugee camps in Chad, which were again developed on the ground, with refugees. The next steps are to “repeat” the process in Kenya, in the Kakuma camp (where access to fresh vegetables is very expensive, following more of the Peru model), and then to Namibia, where the government and Ministry of Education has expressed in incorporating hydroponics into school meals programmes.

Bringing it back to this year’s Innovation Challenge, Nina emphasizes that it’s important to design something sustainable from the beginning, and focus on a “proof of concept” before thinking about repeating and adapting. When you start seeing the first small successes, and the solution is improving people’s lives, you will naturally garner interest from other stakeholders, and other units, COs, and/or host governments will naturally end up “asking” for the solution, and therein lies the opportunity to repeat it.

In other words, don’t repeat just for the sake of repeating, but rather focus on adapting your proposed solution to the environment where you hope to implement it. There are many more great ideas out there, waiting to be adapted – we’d love to hear yours!